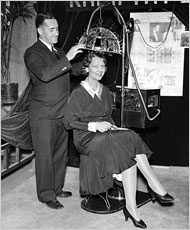 A demonstration of a new “psychoanalyzing apparatus” in 1931.

The answer matters. In trying to ascend from (as Freud once put it) “hysterical misery to ordinary unhappiness,” millions of Americans attend weekly therapy sessions of myriad kinds, at costs that can exceed $10,000 a year. Large professional edifices — psychiatry, psychology, social work, among others — are constructed atop the notion that psychotherapy works. If it were to be conclusively demonstrated that therapy doesn’t work, therapists would be put out of business; that’s effectively what’s already happened to Freudian psychoanalysts.

Jonathan Engel, a professor of health care policy at Baruch College, begins “American Therapy” by asserting: “Psychotherapy works. Multiple studies conducted over the past half-century have demonstrated that two-thirds of people who engage in psychotherapy improve.” But then, intentionally or not, he dedicates the better part of this fascinating book to complicating that proposition.

And then there’s this: a survey published in the early 1970s found that whereas a majority (59 percent) of people who had visited a professional psychotherapist for mental distress reported having been “helped” or “helped a lot” by the consultation, much larger majorities of people who had consulted a clergyman (78 percent) or a physician without specialized psychological training (76 percent) or — get this — a lawyer (77 percent) reported the same thing. Of course, psychotherapy did develop some pretty wacky offshoots in the 1970s — primal scream therapy, rebirthing therapy and Z-therapy (which seems to have involved, among other things, poking and tickling the patient) — so maybe it’s not surprising that people got more psychic relief from their lawyers than their therapists. But while a 1974 paper by a Johns Hopkins psychiatrist criticized the “charlatans” who “preyed on the gullible and the self-deluded,” these kooky therapies were actually surprisingly effective; many of the patients who underwent them reported themselves cured. This would certainly seem to undermine the claims of mainstream professional psychotherapy to specialized knowledge of any particular usefulness. If someone can poke and tickle a neurotic patient to health, why should an aspiring psychotherapist bother to get a graduate degree? Is psychotherapy just a high-priced placebo?

Engel describes an experiment that seems to have been animated by these very questions. In 1979, a Vanderbilt University researcher named Hans Strupp divided 30 patients with psychological problems into two groups, one to be treated by trained psychotherapists, the other by humanities professors with no psychological expertise. The result? The two groups reported improvement at the same rates. “Effective psychotherapy,” Engel writes, “seemed to require little more than a willing patient and an intelligent and understanding counselor who met and spoke regularly and in confidence.”

A University of Pennsylvania study found that the most successful therapists — regardless of whether they were Freudians or behaviorists, cognitive therapists or Z-therapists — were honest and empathic and connected quickly and well with other people. (Krupp’s humanities professors may have fared so well because they were chosen based on how well likedthey were.) Studies like Krupp’s rattled the foundations of the field and, as Engel puts it, “shook therapists’ confidence in their own rectitude.” But, as Engel takes pains to remind us, if twice as many distressed people improve with therapy as without it — as studies consistently show — those are still pretty good odds for psychotherapy.

The question of effectiveness is only incidental to Engel’s main goal, which is to tell the story of how, over the course of less than 100 years, psychotherapy went from being an obscure treatment for ­upper-middle-class Jews in fin-de-siècleVienna to being a staple of mainstream American medical practice and a fixture of our popular culture. Mining both medical journals and the popular press, Engel spins a richly textured tale of psychotherapy’s rise.

Naturally, the story begins with Freud, a thoroughly unlikely candidate to become the progenitor of anything distinctly American. He visited the United States only once, in 1909, and found the country rather barbaric. Practical-minded Americans, for their part, would not seem to have provided a receptive audience for his arcane theory of mind, with its id, ego and superego, and its references to Oedipal crises, castration complexes and penis envy. But the most eminent American psychologists of the day — G. Stanley Hall at Clark University, James Jackson Putnam at Harvard, Adolf Meyer at Johns Hopkins and, later, Harry Stack Sullivan, of the Washington School of Psychiatry, among others — embraced and promoted Freudian theory. Psychoanalysis, Engel observes, “seemed to be compatible with a strain in the American zeitgeist,” and the psychoanalytic establishment here “rigidly stood by the Freudian canon for decades” after his death.

For several decades after Freud’s visit to America, psychotherapy remained at the margins of American culture; mental illness was still a little discussed, and highly stigmatized, phenomenon. World War II changed that: when 12 percent of draftees — nearly two million men — were rejected for “neuropsychiatric” reasons, it profoundly altered the American perception of mental illness; psychiatric problems became, in some sense, normal. William Menninger, who was serving as chief psychiatrist of the United States Army, noted that “people are beginning to see that damage of the same kind can be done by a bullet, bacteria or mother-in-law.” After the war, terms like “repression” and “inferiority complex” began cropping up in movies and best-selling novels. “Where the public once turned to the minister, or the captain of industry, or the historian or the scientist,” one social critic observed, “it is now turning more and more to the psychiatrist.” (Engel writes about the fascinating battle lines drawn between psychiatrists and the clergy during this time, with their diametrically opposed notions of guilt.)

When Time magazine put Freud on its cover in April 1956, the psychoanalytic moment in America had arrived, and for the next several decades psychoanalysts largely dominated the mental health field. But even as Freudians occupied the top echelons in the psychiatric institutes and the medical school residency programs, and the psychoanalytic idiom was tightly woven into the culture, more and more studies were calling into question the effectiveness of the psychoanalytic enterprise. In 1975, the behavioral psychologist Hans Eysenck declared (controversially) that “Freudian theory is as dead as that attributing neurotic symptoms to demonological influences, and his method of therapy is following exorcism into oblivion.”

The death warrant may actually have been written earlier, in the 1950s, on the first prescriptions for Thorazine, an anti­psychotic medication so effective that it became known as “the drug which emptied the hospitals.” Though Freud himself anticipated the age of biological psychiatry (in 1938, he wrote “the future may teach us to exercise a direct influence, by means of particular chemical substances, on the amounts of energy and their distribution in the mental apparatus”), the realization that drugs could so successfully treat some forms of mental illness thoroughly discombobulated the psychoanalytic profession. If drugs worked, that implied an organic, or medical, basis for neurosis, which in turn challenged some of the basic assumptions of psychoanalytically oriented therapy. If mental illness was due to some physical anomaly in the brain, wasn’t the best way to treat the illness by directly addressing that anomaly, with a pill? By the mid-1960s, the psychiatric establishment was moving definitively in a pharmaceutically oriented direction.

Meanwhile, the advent of even better drugs like Prozac (which went on the market in 1987), and the proliferation of cognitive therapies, in which the patient works with a therapist in a focused way to change maladaptive ways of thinking, further diminished Freud’s standing; repeated controlled studies clearly showed both drug and cognitive therapies to be effective in ways that psychoanalysis, with its hours on the couch, has not been shown to be.Though some Freudian analysts continue to practice today, Engel writes, they resemble “nothing more than a fanatical Essene sect, living apart in the wilderness where they could continue to seek truth in the master’s writings.”

Engel describes how factors like changes in the structure of health insurance shaped (and often distorted) psychiatric care, and his book is studded with fascinating tidbits like this one: in the mid-1960s, two buildings on the corner of 96th Street and Fifth Avenue in Manhattan had as many analysts as Minnesota, Oregon, Delaware, Oklahoma, Vermont, Wisconsin and Tennessee combined.

Engel gestures at, but doesn’t directly address, some of the most interesting questions prompted by the rise of psychotherapy. Is the enormous growth of the field over the last century simply a case of supply surging to meet demand, or does the volume of neurosis fluctuate over the years? Are anxiety and alienation always symptoms to be treated, or are they sometimes appropriate — even healthy — responses to the vicissitudes of late modernity? Is psychotherapy an art or a science, a subcategory of humanism or of biology?

But the story Engel does tell is plenty interesting and his conflicted view of Freudianism well worth absorbing: the most influential school of therapy in American history may not have worked very well as a treatment — but it did revolutionize how we think about the human mind.

Scott Stossel, the deputy editor of The Atlantic, is writing a book about anxiety.

Welcome to your brand new blog!

This is a sidebar and can be changed in Widgets in your dashboard.

You can also modify number of sidebars in theme options!

If you have any specific topic that you would like posted and discussed on this blog, please email your ideas to me at nelsodo1@rhinelander.k12.wi.us.
Skip to toolbar